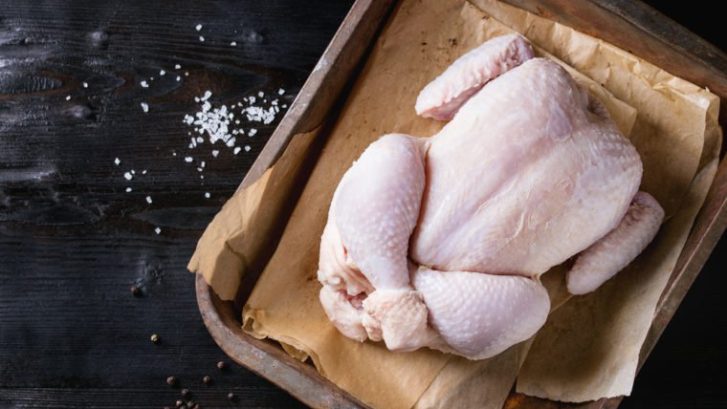 Our concierge family practice doctors at MD 2.0 in Jupiter understand that old traditions die hard, especially if it’s something learned from our parents, who learned it from their parents, and so on. But if you’re one of those who steadfastly wash your chicken before you cook it, we’d like to try to convince you to stop doing that, for the sake of your health.

Most chicken is contaminated

One test by Consumer Reports (CR) found that 97 percent of raw chicken breasts contained potentially harmful bacteria, primarily salmonella and campylobacter. Together, these two contaminants are estimated to cause nearly two million cases of food poisoning in the U.S. every year.

Campylobacter is one of the top four causes of diarrhea around the world, according to the World Health Organization (WHO). The Centers for Disease Control and Prevention (CDC) estimates that salmonella contamination is responsible for approximately 1.2 million illnesses in the U.S. every year, along with 23,000 hospitalizations, and 450 deaths.

This may lead you to believe that the practice of washing your meat before you cook it is a good idea. Unfortunately, the opposite is true.

Julia Child got it wrong

Whether it comes from parental training, or from many popular TV chefs, including Julia Child, or even from your own intuition, the practice of rinsing chicken before roasting it will not do anything to remove the bacteria it contains. In fact, giving your chicken (or turkey) a bath before cooking has just the opposite effect, with tests showing the bacteria on the bird become aerosolized—that is, turned into tiny droplets—which spread around the kitchen to distances of up to three feet.

That’s why the CDC warns, “Don’t wash your raw chicken! Washing can spread germs from the chicken to other food or utensils in the kitchen.” Not to mention onto your skin, hair, and clothing.

Still not convinced? The Food Safety and Inspection Service (FSIS) of the U.S. Department of Agriculture (USDA) recently conducted a study in a test kitchen. Nearly 300 subjects were told to prepare a chicken dinner and salad the way they did at home.

So why do people do it?

It’s difficult to break some people of the practice. Some, as we said, have been trained to do it, and it seems to make a certain amount of sense to them.

Others are mindful of the way chickens are processed these days, with speed the ultimate goal in slaughtering, inspecting, and cutting up chickens, which includes only a visual inspection, not testing for any type of contamination. Thus they believe washing a bird is a necessity.

Others wash to remove what they term the “ick,” either pieces of entrails or other innards remaining on the bird, or a slimy feeling.

Dr. Jennifer Quinlan, an associate professor at Drexel University in the Department of Nutrition Sciences, has been campaigning against washing poultry for several years, ever since she completed a USDA-funded study on the topic.

“If you wash it, you’re more likely to spray bacteria all over the kitchen and yourself,” she says, adding that rinsing with water won’t kill the bacteria anyway. And, she told NPR, “If your chicken is so slimy that it needs washing, something is wrong.”

What to do instead?

If your chicken has visible signs of foreign matter, you can wipe it away with a clean paper towel. Otherwise, proper cooking is the only effective way to destroy bacteria.

The CDC recommends the following steps to prevent food poisoning:

Call us if you suspect food poisoning accompanied by any of the following symptoms:

Those more likely to be susceptible to food poisoning include children under age five, adults ages 65 and older, those with weakened immune systems, and pregnant women.

Food poisoning can be dangerous, so if you have any questions, don’t hesitate to contact us.