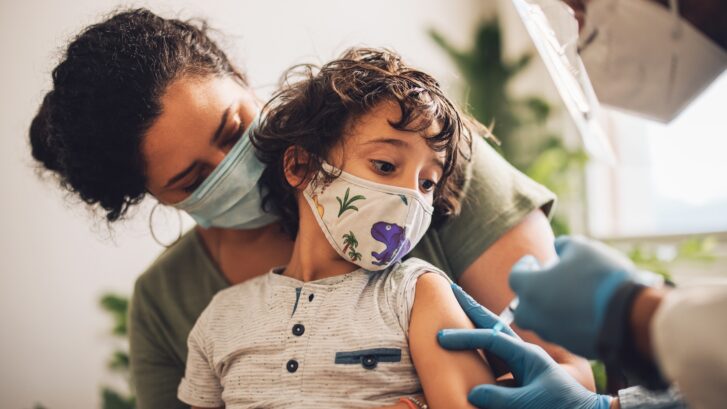 Our concierge primary care doctors here in Jupiter understand that everyone wants to get back to the pre-pandemic days when we could go about our lives without worrying that an invisible enemy was stalking us. Unfortunately, we’re not there yet.

While cases have been dropping, two weeks ago deaths in South Florida rose by 165. And Florida just passed the grim milestone of 70,000 residents’ deaths, making us the third state (behind California and Texas) to do so.

This means certain vulnerable populations—the elderly, the immune-compromised, babies, and young children—are still at risk of contracting this deadly virus.

So we want to bring you the latest news on protecting the youngest among us.

Last month the CDC released a study confirming that expectant mothers who receive an mRNA COVID-19 vaccine during their pregnancy pass the immune protection on to their newborns. (The Johnson & Johnson vaccine wasn’t included in the study.)

This is important because researchers who studied newborns at 20 pediatric hospitals in 17 states from July 1, 2021 through January 17 of this year found that 88 percent of the babies admitted to the ICU with COVID-19 had been born to unvaccinated mothers.

Earlier research showed that vaccines for COVID-19 as well as for whooping cough and the flu could safely cross the placenta, allowing mothers to pass antibodies to their babies, but this is the first study to confirm that outside a clinical setting.

“And while we know that these antibodies cross the placenta, until this study, we haven’t yet had data to demonstrate whether these antibodies might provide protection for the baby against COVID-19,” she explained.

She also reminded prospective mothers of earlier studies showing that pregnant women face a higher risk of severe illness from COVID-19, and that the virus has been shown to attack and destroy the placenta, resulting in stillbirths.

Data released by the CDC and the New York State Health Department this month regarding the effectiveness of Pfizer-BioNTech’s vaccine for kids five to 11 years old were less encouraging, but still had some good news for worried parents.

Some experts thought that the problem might be the smaller dose given to younger kids, which is a third of the adult dose. But most say the problem isn’t the dosing size; instead, it’s the more contagious omicron variant of the virus.

Vaccinations have been less protective against omicron in the general population as well, and the five- to 11-year-old group started receiving their vaccines just as the omicron variant began to appear.

The CDC said that between April and January nine vaccinated children ages five-17 had died from COVID-19, compared to 121 deaths in that age group who were not vaccinated.

The good news is that the same study found that the vaccine was 74 percent effective against hospitalization for five- to 11-year-olds, even against the omicron variant.

It was also 92 percent to 94 percent effective against hospitalization for those ages 12 to 17, but these data were gathered when the delta variant predominated.

“We knew from the adult data that’s been published previously that the vaccine provides less protection versus omicron than it did against delta, and I think we’re continuing to see that pattern in children,” said Ruth Link-Gelles, who leads the CDC’s team researching the effectiveness of coronavirus vaccines.

“We also know from the adult data that the vaccine provides much better protection against severe disease,” she said. “The infection cases are less concerning to me as a parent. What I want to avoid are midnight emergency room visits, hospitalizations and, obviously, death. And I think that these data do show that we’re continuing to see protection against more severe outcomes.”

Dr. Paul Offit of the Children’s Hospital of Philadelphia agreed.

“If you’re vaccinated, you may get a mild infection and we’re just going to have to learn to live with that,” he told PBS News Hour.

He said that children admitted to his hospital with severe COVID-19 are all unvaccinated, “and it’s hard to watch.”

Jess Hackell, a pediatrician in Rockland County, N.Y., told The Washington Post that these new studies wouldn’t change his advice to parents.

“The vaccine is extraordinarily safe, and it protects against the rare but serious illnesses,” he wrote in an email.

“There is no downside to giving it, even if the efficacy is less than hoped—one is STILL better off having had the vaccine than not, even if the benefit is smaller,” he said.