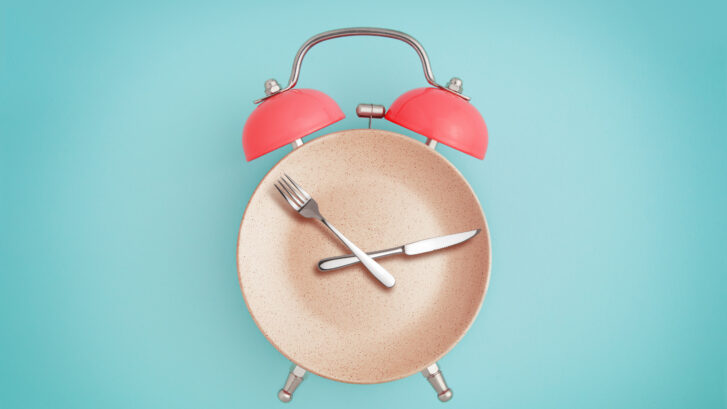 One side effect from the coronavirus pandemic has been an increase in weight gain among many of us who have been forced into inactivity through the stay-at-home restrictions. In addition, people have turned to stress eating and frenzied periods of baking—as witness the lack of flour and sugar on store shelves—so it’s not surprising that some people are finding it harder to fit into their summer clothes.

If you’ve been struggling to lose a few pounds, our concierge doctors may have a solution for you that doesn’t involve changing what you eat, but when you eat. The concept is known as intermittent fasting (IF), and it may not only help you lose weight, but improve several markers for good health. buy tretinoin

Intermittent fasting means not eating three regular meals (plus snacks) throughout the day, but rather confining all calorie intake to a specific window of time. Other popular types of IF involve either fasting on alternate days, or 5:2 fasting, which involves eating normally five days a week and fasting for two non-consecutive days a week, consuming 500-600 calories on fasting days. colchicine generic

The first approach, known as 16:8, is the most popular, in which you fast for 16 hours a day and consume all your meals within an eight-hour period. https://www.pacificpropt.com/canadian-pharmacy-viagra/

These types of eating regimens have proven to be as effective at weight loss as a typical low-calorie diet, and adherents say it’s easier to maintain because you can still eat normally while losing weight.

According to researchers at Johns Hopkins Medicine, there are numerous health benefits that result from intermittent fasting.

• improved working memory and verbal memory
• improved blood pressure and resting heart rates, as well as other heart-related measurements
• reduced tissue damage during and after surgery
• loss of fat while maintaining muscle mass

The Mayo Clinic reports: “Some research suggests that intermittent fasting may be more beneficial than other diets for reducing inflammation and improving conditions associated with inflammation, such as Alzheimer’s disease, arthritis, asthma, multiple sclerosis, [and] stroke.”

A report last year in the New England Journal of Medicine (NEJM) found that “eating in a six-hour period and fasting for 18 hours can trigger a metabolic switch from glucose-based to ketone-based energy, with increased stress resistance, increased longevity, and a decreased incidence of diseases, including cancer and obesity.”

And the American Heart Association recently reported in its journal Heart that “[r]egular fasting is associated with lower rates of heart failure and a longer life span, according to two new studies.”

But isn’t breakfast “the most important meal of the day?” Although numerous studies have yielded conflicting answers, several of those that came down on the necessity of eating breakfast were funded by cereal companies. More recent studies have found little difference in the weight, cholesterol, blood sugar, or resting metabolic rates between those who eat first thing in the morning and those who don’t.

The good thing about intermittent fasting is, once you train your body to adjust to this new pattern of eating, you won’t miss your three squares a day. If you ease into it slowly, you won’t feel hungry, lightheaded, or deprived.

In fact, this is the way humans ate in prehistoric times, according to Johns Hopkins neuroscientist Mark Mattson, Ph.D. Mattson, who has studied IF for 25 years, says our bodies have evolved to be able to go without food for hours, days, or longer, because that’s the way our hunter-gatherer ancestors ate. They hunted for roots, nuts, and berries, and hunted for game to survive, but their meals depended on finding these intermittent food sources.

How to do IF

You can begin a 16:8 IF regimen just by skipping breakfast, having a late lunch, and an early dinner, confining the two meals to an eight-hour window. If you find you’re starving in the morning, try gradually moving breakfast later and later until it melds with your lunch hour. Eventually you’ll train your body not to miss breakfast at all.

The rest of the time, stick with non-calorie liquids such as black coffee, unsweetened tea, or water.

Physicians don’t recommend IF if you’re pregnant or breast-feeding, under 18 or have a history of eating disorders. In addition, you should talk with us before trying IF if you have diabetes, high blood pressure, kidney stones, gastroesophageal reflux, or other chronic health conditions.

Also, if you’re the over-achiever type who might be thinking, “Well, if some fasting is good, more will be even better,” don’t. Longer periods without food can encourage your body to store more fat because it slips into starvation mode.

Finally, eating normally during the off-fast portion of the day or week doesn’t mean binging on junk food. Whether fasting or not, your body needs healthy, nutritious food to maintain health and a normal weight. This includes whole grains, nuts, leafy greens, healthy fats, and lean protein.