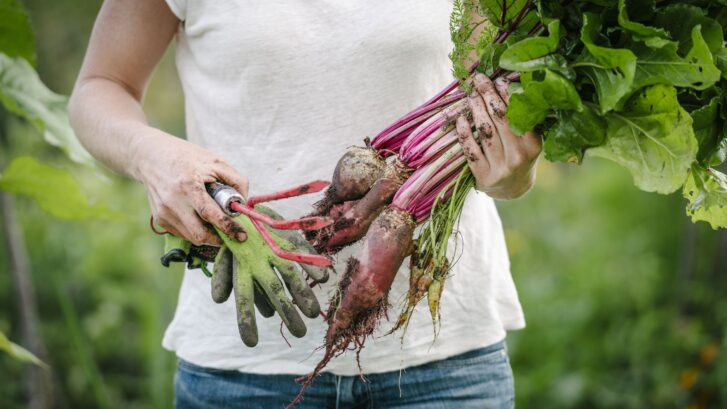 The Centers for Disease Control and Prevention (CDC) recommends 2.5 hours of moderate to vigorous activity each week for optimal physical health, concluding that this amount of exercise reduces the risk of:

Our doctors in Jupiter would like to suggest an easy, fun, and rewarding way to meet that fitness goal: gardening.

You probably already know that exposure to nature is beneficial to both physical and mental health.

For example, a 2015 meta-review of 143 studies published in the journal Environmental Research found that people with access to green space generally had a slower heart rate, lower blood pressure, and less blood levels of the stress hormone cortisol. Researchers also found significantly fewer cases of diabetes and lower rates of mortality from heart disease in the nature-exposed group.

Another meta-analysis from 2017 looked specifically at the health effects of gardening and found the hobby had a “significant positive impact on health.”

“There are many physical and cardiovascular benefits from doing the manual labor of gardening,” says UNC Health internal medicine physician Robert Hutchins.

It has also been shown to improve strength, stamina, and flexibility.

The CDC agrees. It lists gardening as one of the suggested ways to achieve a moderate-intensity-level of activity.

It can also help your waistline. The CDC says one hour of light gardening and yard work burns about 330 calories, more than walking at a moderate pace for the same amount of time.

In addition, a study in the Journal of Health Psychology compared gardening vs. reading as stress-relieving activities and found that test subjects experienced significantly more stress relief while gardening than while reading.

Secret in the soil?

Naturally, all the physical activity associated with gardening is good for the body as well as the mind, but researchers may have found a hidden component to gardening that might explain why it’s such a healthy type of exercise. And that is a beneficial soil-dwelling microorganism called Mycobacterium vaccae (M. vaccae) that appears to produce a tranquilizing effect on the brain, quelling inflammation throughout the body.

As reported in the University of Colorado Boulder’s CU Boulder Today, in 2019 CU researchers identified, isolated, and chemically synthesized a novel lipid, or fatty acid, found in M. vaccae, and used it to study how it interacted with macrophages, or immune cells, when the cells were stimulated.

“We think there is a ‘special sauce’ driving the protective effects in this bacterium, and this fat is one of the main ingredients in that ‘special sauce,’ ” said senior study author and Integrative Physiology Professor Christopher Lowry.

“It seems that these bacteria we co-evolved with have a trick up their sleeve,” he said.

“When they get taken up by immune cells, they release these lipids that bind to this receptor and shut off the inflammatory cascade,” he explained.

His team found that when cells were pre-treated with the lipid, they inhibited a host of key pathways that drive inflammation.

Inflammation, of course, has been linked to a wide range of diseases, including:

And in 2017, inflammation was definitively linked with cardiovascular disease, in a study known as CANTOS.

It has also been implicated in more severe outcomes among those who have contracted COVID-19.

“The idea is that as humans have moved away from farms and an agricultural or hunter-gatherer existence into cities, we have lost contact with organisms that served to regulate our immune system and suppress inappropriate inflammation,” Lowry said.

“That has put us at higher risk for inflammatory disease and stress-related psychiatric disorders,” he added.

And it seems that you inhale M. vaccae every time you work in the garden or even take a walk in the wild.

“You can also ingest mycobacteria either through water sources or through eating plants—lettuce that you pick from the garden, or carrots,” Lowry told Discover magazine.

Author Richard Louv coined the phrase “nature deficit disorder” in his 2005 book “Last Child in the Woods: Saving Our Children from Nature Deficit Disorder.” In it, he argued that elements of our urbanized lifestyle, including few natural spaces, a car-focused culture, more screen time, changes in the perception of risk (e.g., “stranger danger”), less leisure time, and increased time pressure from work or school, combine to decrease or even eliminate contact with nature for both adults and children, according the the National Institutes for Health (NIH).

The solution was contact with nature, according to a 2015 study, which found that increased interaction with the natural world improved a range of mental health measures, including relaxation, stress relief, and increased social connections.

So if you want to improve your mental and physical health, relieve stress, and have beautiful flowers or tasty vegetables to show for it, our primary care concierge doctors recommend you grab a spade and start digging.

“The thing about gardening is that you have to have faith in the future,” Gwenn Fried, manager of Horticulture Therapy at NYU Langone’s Rusk Rehabilitation, told Good Housekeeping.

“Growing something green, something real, something alive, is a hopeful thing to do,” she said.