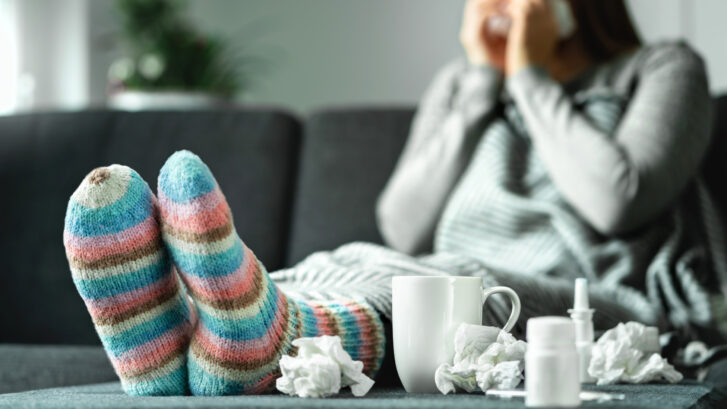 Our concierge doctors at MD 2.0 in Jupiter have heard many of those pushing back against social distancing restrictions wondering why such a fuss is being made over the viral respiratory illness COVID-19. They claim it’s just another type of flu.

So we thought we’d examine some of the many ways the novel coronavirus is not “just the flu.”

Perhaps the most outstanding difference between seasonal flu and COVID-19 is the death rate. Four months into the outbreak, COVID-19 is proving far more lethal, based on antibody tests. Early estimates said the risk of death from infection was ten times that of the flu. As more antibody tests are conducted, the current estimates put it at between five and seven times more deadly.

Even if the critics are correct and the lowest available numbers are used, it is still twice as deadly among those who have been infected. The actual number of deaths in this country would seem to bear that out. So far at least 70,000 Americans have died from COVID-19 in just four months, as opposed to the average death rate of between 20,000 and 60,000 for a typical flu season, October through May. And the COVID-19 death rate is still rising rapidly.

The transmission rate of the SARS-CoV-2 virus is higher than that of the flu. Known as the R0 (pronounced “R-naught”) factor, or the rate of transmission from a single person, someone infected with the flu virus can be expected to transmit the virus to just over one other person (an R0 of 1.3), vs. an estimated RO of 2-3 others infected for the novel coronavirus.

This is due in part to the fact that most carriers are asymptomatic or pre-symptomatic. That is, they can unknowingly spread SARS-CoV-2 for many days before becoming sick themselves. The incubation period—from the time someone is infected until they show symptoms—is an average of five days.

Unlike with other respiratory diseases, those who do require hospitalization and ventilator therapy require a much longer time on the ventilators, up to four weeks in some cases. In addition, once recovered, some people report feeling lethargic, weak, and short of breath for weeks afterward.

In extreme cases, some whose lungs were severely infected have lingering reduced lung function after recovery, known as “pulmonary fibrosis,” or scarring of the lungs. Whether this effect will be permanent remains to be seen, but again—this is not a typical result from the flu.

As more people around the world contract this new virus, doctors are seeing strange symptoms and results among the population, none of which are associated with the seasonal flu.

Unlike with the flu, doctors around the world are finding that COVID-19 patients are experiencing severe effects throughout the body. This includes heart inflammation which can lead to cardiac arrest, acute kidney disease, liver problems, intestinal and liver damage, and neurological malfunction.

And as many as 40 percent of patients are developing blood clots that do not respond to the usual anticoagulant treatment for these often-deadly events.

Heart attacks and strokes in the young

Once again, a distinguishing feature not seen with the flu are the reports of young and middle-aged people, barely experiencing COVID-19 symptoms, suddenly experiencing strokes and heart attacks.

“We are used to thinking of 60 as a young patient when it comes to large vessel occlusions [i.e., deadly strokes],” Eytan Raz told The Washington Post. “We have never seen so many in their 50s, 40s, and late 30s.” Raz is an assistant professor of neuroradiology at NYU Langone.

Some people with relatively mild symptoms, or those who appear to be recovering from more severe symptoms, are experiencing what doctors have begun calling “second-week crash,” in which they can go from stable to near death in a matter of hours.

No one knows the cause, but it tends to appear around the fifth through the tenth day of the illness. Again, this effect is not seen with the seasonal flu.

Another symptom, which is common in SARS and MERS but not the flu, is the phenomenon of “glass lung,” in which white spots appear around the edges of the lungs on the CT scans of those infected with COVID-19. In fact, this is such a distinctive signature of the illness that many doctors are diagnosing patients based on their CT scans alone.

Normal lungs appear black on a CT scan because they’re filled with air. The “glass lung” appearance, officially known as “ground glass opacity,” indicates a partial filling of of the air spaces in the lower portion of the lungs. These areas become hardened, preventing the patient from breathing properly.

Other strange symptoms not associated with the flu include so-called “frostbite toes,” also dubbed “COVID toes,” which are purple lesions appearing on the toes and fingers of those infected, as well as purple rashes on the arms, legs, and buttocks, or a sudden loss of smell and taste.

Finally, humans have no herd immunity at all to this brand-new virus, unlike with the flu, which has been around for generations. And, of course, we have flu vaccines, as well as antiviral drugs to treat it, which we don’t for this new virus.

No, COVID-19 is not just like the flu. It not only has deadly consequences across all ages, it attacks the body in unique ways we’re still learning about. This is a virus that should be taken seriously.

Please let us know if you have any questions or concerns.