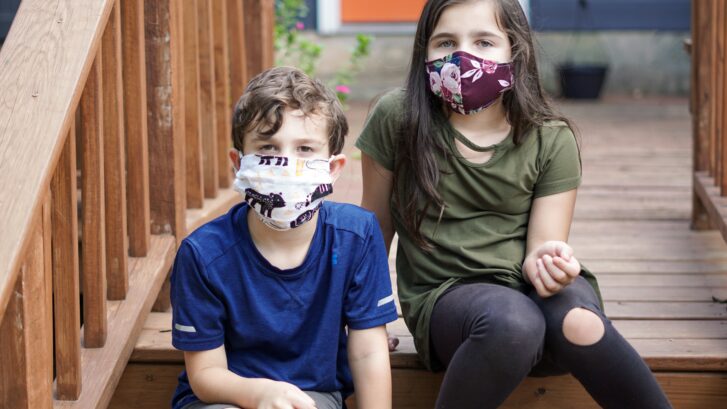 From the onset of the coronavirus pandemic, it became clear the majority of those most affected by COVID-19 infections were adults over the age of 65. The severity of the illness and deaths decreases in younger people. Many began to believe we didn’t have to worry about children when it came to the virus.

Children may be carriers and able to infect others. But many thought if they should become ill, in most cases they’ll exhibit either mild symptoms or none at all.

Our concierge doctors want to warn you that this is a misconception. At least 120 children in the U.S. have died from COVID-19. And a new study last month at the Children’s Hospital of Philadelphia (CHOP) found a disturbing result of coronavirus infection in children. They found elevated levels of a biomarker (C5b9) related to blood vessel damage, even in those with minimal or no symptoms.

They also found a high proportion of children with SARS-CoV-2, the coronavirus that causes COVID-19, were also diagnosed with a condition called thrombotic microangiopathy (TMA). TMA leads to clots in small blood vessel. It has been linked to severe COVID-19 symptoms in adults.

“We do not yet know the clinical implications of this elevated biomarker in children with COVID-19 and no symptoms or minimal symptoms,” co-senior study author David T. Teachey, MD, said in a news release. Teachey is the Director of Clinical Research at the Center for Childhood Cancer Research at CHOP.

“We should continue testing and monitoring children with SARS-CoV-2 so that we can better understand how the virus affects them in both the short and long term,” he added.

There’s still a great deal we don’t yet know about this novel coronavirus, including why it affects both children and adults in varying degrees. At least 30-40 percent of adults, for example, show minimal or no symptoms at all. They still can transmit the infection to others, however.

Despite having a higher viral load, children are even less likely to exhibit symptoms. This means children tend to have a larger amount of the virus in their upper respiratory tracts than adults. Does that mean they can transmit the virus even more readily than adults?

Again, we don’t know for sure. But a recent Harvard Health paper warns “the presence of high viral loads in infected children does increase the concern that children, even those without symptoms, could readily spread the infection to others.”

One thing we do know is a small number of children can have severe effects. One of these is a new condition. The Centers for Disease Control and Prevention (CDC) calls it “multisystem inflammatory syndrome in children,” or MIS-C. It now seems to have affected approximately 300 children in the U.S, at least five of whom have died.

Originally, doctors thought there was an unusual outbreak of a rare form of Kawasaki’s disease. The symptoms reported were similar (persistent fever, rash, and inflammation of the blood vessels). It has now, though, been connected specifically with the SARS-CoV-2 virus.

“This [MIS-C] is a new childhood disease that is believed to be associated with [COVID-19], and it can be lethal because it affects multiple organ systems [including] the heart and the lungs, gastrointestinal system or neurologic system,” neonatologist Alvaro Moreira said in a statement. Moreira is an assistant professor of pediatrics at The University of Texas Health Science Center at San Antonio.

His team reviewed 662 cases of MIS-C worldwide between January and July of last year. They found more than half of the children studied suffered heart damage as a result of the condition. These children may require lifelong care and treatment, United Press International (UPI) reported in September.

“Evidence suggests that [these] children . . . have immense inflammation and potential tissue injury to the heart, and we will need to follow [them] closely to understand what implications they may have in the long term,” Moreira concluded.

Researchers in the CHOP study were surprised to find the biomarker C5b9 present. They found it not only in children with severe symptoms of COVID-19 and MIS-C, but also in those with minimal or no symptoms.

“Although most children with COVID-19 do not have severe disease, our study shows that there may be other effects of SARS-Cov-2 that are worthy of investigation,” Teachey said.

“The most important takeaway from this study is we have more to learn about SARS-Cov-2,” he concluded. “We should not make guesses about the short- and long-term impact of infection.”

Neither of the two vaccines approved for adults have been tested in children under age 12. It could be a long wait until kids get protection from the virus.

In the meantime, we urge parents to take the same precautions with their children that they do with themselves. Socially isolate as much as possible, frequently wash your hands, and wear masks when outside the family circle.