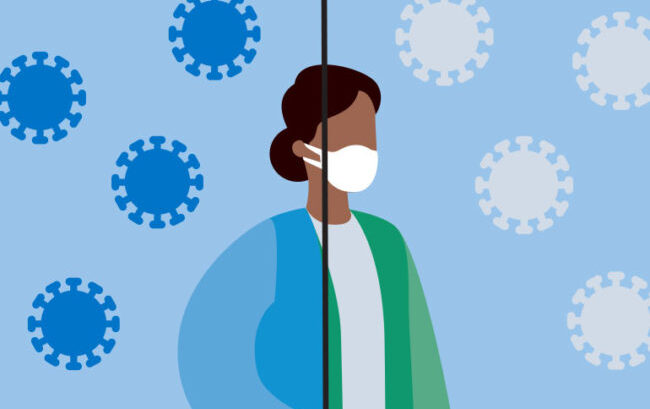 As most people have largely begun to reassume their pre-pandemic lives, the normalcy of it all makes many of us feel the coronavirus is behind us. Especially if they’ve been vaccinated, boosted, and/or already had COVID-19.

Our primary care concierge doctors in Jupiter have heard of many cases, however, including among our patients, of people getting infected with the virus more than once.

“Reinfections, unfortunately, are not unusual for coronavirus,” Akiko Iwasaki, a professor of immunobiology at Yale University, told NBC News last month. “It’s just the nature of this virus infection.”

We have smartphones and smart cars, and now it appears we have a smart virus, as well.

Mansoor Amiji, a distinguished professor in the Department of Pharmaceutical Sciences at Northeastern University, tries to think like a virus when explaining how it keeps mutating and surviving so efficiently. He asks himself, what does it want? What does it need to do to find new hosts, or to reinfect old ones?

The answer, he says, lies in the spike proteins, the “crown” on the virus that continues to mutate at random each time it reproduces until it creates a new variant that is more transmissible than previous ones.

“That’s really the natural course of a virus,” he explains in a press release from the university.

When the novel coronavirus first emerged 2 1/2 years ago, reinfections were rare, but as the virus has learned to adapt to our defenses, they’re becoming more common.

Just four months ago, reinfections were still somewhat unusual. That’s when the BA-2 subvariant of the omicron variant of the virus was circulating. Now, however, the newer BA-4 and BA-5 subvariants are the dominant strains in the U.S., and experts say they are quite different from the original omicron BA-1 strain. They have learned to bypass our immunity, whether from vaccines or prior infection.

If you became infected with the BA-2 subvariant, you can still become infected from the BA-4 or BA-5 subvariant explained Neil Maniar, professor of practice in Northeastern’s Department of Health Sciences.

“It doesn’t mean that we have to fear reinfection,” he said, “but it does mean we have to keep in mind that just because you got COVID once, it doesn’t mean you won’t get it again within a month or two months or three months, because there are these different subvariants that are circulating.”

The U.S. isn’t currently tracking reinfections of COVID-19, NBC News reports. However, U.K. researchers are, and they found that the risk of reinfection was eight times higher during the omicron wave than it was in last year’s delta wave.

But does this happen with other viruses? It can happen with the common cold, another type of coronavirus, according to Anthony Fauci, chief medical advisor to the White House. Fauci himself tested positive last month after experiencing “mild” symptoms, although he’s received two booster doses of the vaccine.

And John Goldman, infectious disease specialist at UPMC in Pittsburgh, Pennsylvania, told WHTM-ABC27 in Harrisburg that with most other coronaviruses, it is possible to get the same virus twice.

“You probably can’t get reinfected in the first 90 days, but after 90 days, the further and further out you are from your original infection, the more likely it is that you can be reinfected,” he told the station.

The problem is because the virus is still relatively new, it’s hard to make predictions on how quickly a person can be reinfected because there’s little history on SARS-CoV-2 to study. So experts are drawing on experience with other similar viruses.

“We do not know [how long immunity lasts after infection],” Fauci told NBC News last month, “but in experience from other infections, if you’re infected, there’s probably a few months’ grace period where you really have enough ongoing immunity that you’re not going to get reinfected.

“For the most part, you likely will have a few months’ period of protection,” he added. “But after that, we’re seeing that it does wane.”

And he stresses that that’s not a guarantee.

“Anecdotally, you’ll hear a case of someone who got infected and then four weeks later, they got infected again—that happens,” he told NBC.

“Normally, the reinfections are milder,” Akiko Iwasaki, a professor of immunobiology at Yale University, told NBC. “It’s less likely that you’ll get sicker the second time.”

Nevertheless, some people can get sicker when reinfected, she said. An example would be if someone is exposed to a much higher amount of virus than in the first infection, or if a person’s immunity against COVID has waned significantly.

Fauci told the network that elderly people with underlying conditions or immunocompromised people, even if vaccinated and having had a prior infection, may not be as protected against severe disease as some.

And Public Health England (PHE) in the U.K. also found that those who were unvaccinated, younger, or had a mild or asymptomatic infection with a lower viral load were more likely to be reinfected, NBC reported.

But just because reinfections are possible, that doesn’t mean they’re inevitable. Being up to date on vaccinations and masking indoors in places with high transmission will lower your risk, as we’ve seen throughout the pandemic.