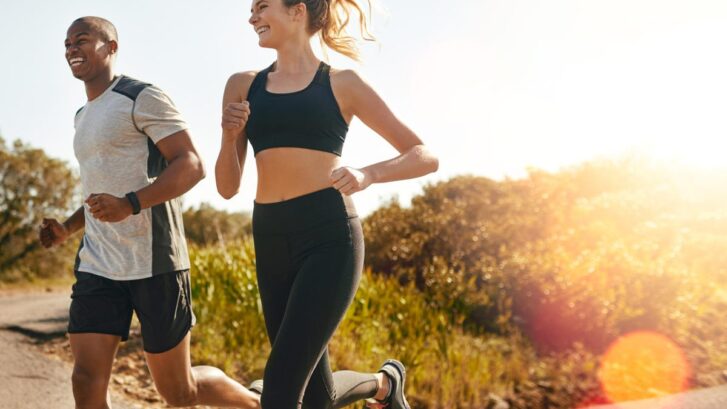 If you need another excuse to slip on your running shoes and head outdoors, our concierge primary care doctors in Jupiter have a good one for you: Exercise can increase the effectiveness of coronavirus vaccines.

Even those with lower levels of physical activity saw a benefit.

This confirms an earlier study conducted last winter, showing that even a single 90-minute session of aerobic exercise could increase antibodies in those who had just been vaccinated.

Researchers in Johannesburg, South Africa reviewed anonymous medical records, gym visits, and wearable activity-tracker data for nearly 200,000 fully vaccinated healthcare workers between February and October of 2021. (The Johnson & Johnson vaccine was the only one available to the population at the time.)

Participants were categorized according to their average recorded activity levels over the previous two years. Those with the highest weekly levels of physical activity (150 minutes or more per week) were 86 percent less likely to be admitted to the hospital after testing positive for COVID-19 than participants with a low level of physical activity (less than 60 minutes per week).

But even those in the medium and low categories of physical activity saw some benefit, compared to the sedentary group. The medium-level exercisers (60 to 149 minutes per week) were 72 percent less likely to be hospitalized, while with the low-level exercisers (less than 60 minutes per week) the risk of needing hospitalization fell by 60 percent as opposed to those who never exercised.

“The findings suggest a possible dose-response where high levels of physical activity were associated with higher vaccine effectiveness,” the researchers said in a press release.

“This substantiates the [World Health Organization] recommendations for regular physical activity—namely, that 150-300 minutes of moderate-intensity physical activity per week have meaningful health benefits in preventing severe disease, in this context against a communicable viral infection,” they wrote.

This large study confirms an earlier one published last February in the journal Brain, Behavior, and Immunity, which found that even a single 90-minute session of exercise could boost the immune response in those who had just received the flu or COVID-19 vaccine.

The study also found that 45 minutes of exercise did not increase antibodies, making 90 minutes the preferred target to see results.

“As far as we know, our findings are the first of their kind for evaluating exercise response on the COVID-19 vaccine,” Marian Kohut, Ph.D., a professor of kinesiology at Iowa lead researcher, told Medical News Today at the time.

“[They are] the first to show that light [to moderate] intensity, long-duration exercise enhances antibody response for the COVID-19 vaccine,” she said.

Even before vaccines became available, however, numerous studies showed that being physically active substantially lowered the risk of becoming seriously ill or needing hospitalization following infection with the coronavirus.

Robert Sallis, a family, and sports medicine doctor at the Kaiser Permanente Fontana Medical Center in California and former president of the American College of Sports Medicine, led a 2021 study of 48,440 adults before vaccines became available.

This research found that physical inactivity was associated with a higher risk for severe COVID-19 outcomes, including hospitalization rates, intensive care unit (ICU) admissions, and death. Those who were engaging in some activity, or regularly meeting physical activity guidelines, were about half as likely to need hospitalization as patients who were mainly inactive.

An earlier review of 16 prior studies involving nearly two million people likewise found that those who were physically active were far less likely to experience adverse outcomes from the virus.

Sallis told The Washington Post that these findings make sense because we know “that immune function improves with regular physical activity,” as do lung health and inflammation levels, which have been proven to protect against the worst effects of COVID-19.

No one is sure of the reasons for these results. One theory suggests that exercise boosts blood and lymph flow, promoting the circulation of immune cells. The researchers involved in the South African study wrote that it “may be a combination of enhanced antibody levels, improved T-cell immunosurveillance, and psychosocial factors.”

The Centers for Disease Control and Prevention (CDC) maintains that physical activity can improve overall mental and physical health, and reduce the risk of many chronic diseases such as heart disease, cancer, and type 2 diabetes. One 2008 study found that physical inactivity is responsible for more than five million premature deaths every year.

So it makes sense that regular physical activity would confer benefits to our immune system.

And it’s never too late to get moving, even with just a 10-minute walk, according to Jon Patricios, a professor of clinical medicine and health sciences at the University of Witwatersrand in Johannesburg-Braamfontein, who oversaw the new study.

“Doing something mattered, even if people weren’t meeting the full guidelines,” he told The Post.