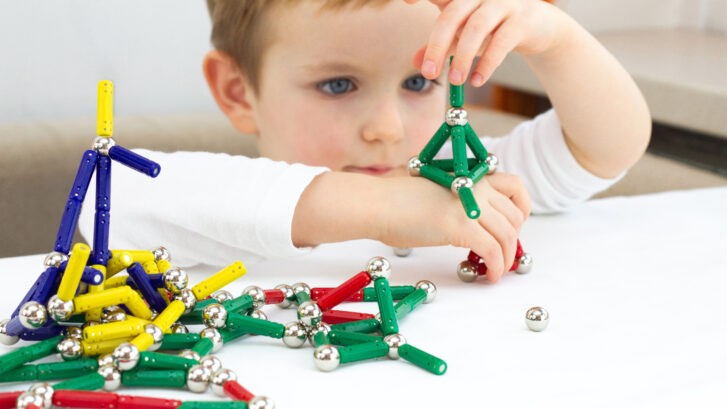 We all know that little children can’t resist putting things into their mouths. It’s one of the ways they explore their new world. But this practice can often be dangerous, especially when it comes to tiny magnet toys.

These toys are composed of high-powered magnets the size of BBs and even smaller. You can twist them into an endless array of fascinating shapes and are irresistible to adults as well as children. So our concierge primary care doctors in Jupiter want to explain the danger to kids that can be involved in having these toys around the house.

Most foreign-body ingestions (FBIs) involve coins, marbles, earrings, and button batteries. These pose a particular danger to children. They’re small enough to become lodged in the esophagus, causing a type of injury similar to a burn.

An even more serious danger to kids involves rare earth magnets. These are responsible for injuries to several thousand children since their introduction a decade ago. In 2019 alone, nearly 1,600 cases of children swallowing these magnets were reported to poison control centers.

These magnets can be up to 30 times more powerful than the typical refrigerator magnets we’re familiar with.

As CBS News reported, “While swallowing a set of any magnets can be dangerous, safety experts are particularly concerned about high-powered rare earth magnets.”

Brands in this category of magnet include Buckyballs, Zen Magnets, DigiDots, and Neoballs. They are typically marketed to adults, and can contain hundreds of these super-powerful magnetic balls.

Many decline to take the threat of these products seriously, or are even disdainful of the threat. They often cite numerous other household products that also pose a hazard to children. But doctors say these products constitute a special danger.

Swallowing just two of them constitutes a medical emergency. The magnets will “find” each other in the intestine and slam together. This could possibly tear the tissue or cause other damage as they do so.

“They can go through the esophagus into the stomach and GI [gastrointestinal] tract,” Amyna Husain, a pediatric emergency medicine physician at Johns Hopkins Children’s Center, told CBS News. “If you have two magnets in different parts of the tissue and they attract each other, the tissue between the two can get pinched off and you lose blood circulation.”

This can cause a tear in the bowels leading to bacteria spilling into the abdomen, she explained. In the most severe cases, patients may need to have parts of the intestine surgically—and permanently—removed. The child may also end up having to depend on a colostomy device for the rest of their lives.

“This is one of those most dangerous products on the market,” Brian Rudolph, spokesman for the North American Society for pediatric Gastroenterology, Hematology & Nutrition, said during a product safety review attended by a Washington Post reporter. “These injuries are gruesome.”

The Consumer Product Safety Commission (CPSC) reported the 2012 case of a three-year-old girl who swallowed 37 Buckyballs. The magnetic balls snapped her intestines together, ripping three holes in her lower intestine and one hole in her stomach. One 19-month-old girl died after swallowing magnets.

Last month, after years of being stymied by the courts and the manufacturers of these devices, the CPSC took the unusual step of pulling Zen Magnets and Neoballs from the markets. This unusual action does not yet affect the makers of other rare earth magnets. But the agency is drafting regulations that would eventually ban all such magnet toys.

Because there are other companies still selling these magnets, and because millions of them have been sold over the years, it’s important that parents be on the lookout for these dangerous products.

And by the way, these injuries don’t just happen to just toddlers, either. Older children, and especially teenagers, have been known to swallow rare earth magnets, either from pure curiosity or on a dare from their peers. Be on the lookout for these toys and keep them out of the house and away from young hands.