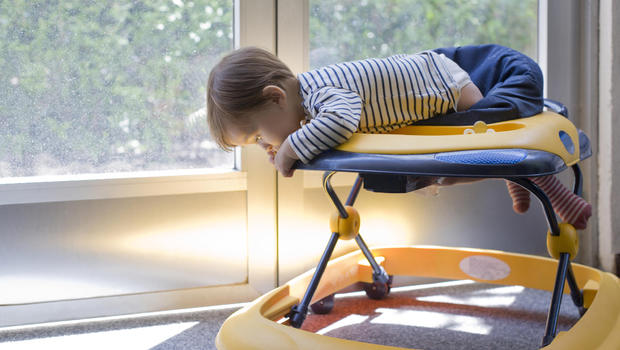 Your concierge family practice doctors in Jupiter, Florida, at MD 2.0 often report on studies that reveal new information. These can be helpful but are often modified or challenged in the future by other studies.

One study released last month and published in the journal Pediatrics, however, conclusively confirms many earlier studies about the dangers of placing babies in walkers. Parents often have the best of intentions when using these devices: helping their children obtain exercise; giving them more independence; even affording them extra “practice” in walking.

But it turns out that not only are baby walkers inherently dangerous, they even delay motor skill progress by introducing an artificial aid that interferes with normal developmental progression. For these reasons, Canada banned them entirely in 2004, whether new or used.

Dr. Gary Smith, director of the Center for Injury Research and Policy of The Research Institute at Nationwide Children’s Hospital in Columbus, Ohio, was the lead researcher on the study. He said the results of his study indicate that baby walkers have no practical use while also posing serious dangers.

“They give children mobility before they’re able to handle it,” he told NBC’s Today show. “They can move up to four feet per second in a walker and even the best parents in the world who are watching their children closely can’t react that quickly.”

He echoed this caution to CBS News when discussing the release of the study.

“It only takes a young sibling to leave the door to the basement stairs open briefly for an injury to occur. A child in a baby walker would be across the room and down the stairs before the parent could respond.”

His study found that more than 230,000 children ages 15 months or younger were treated in hospital emergency departments across the United States for infant walker-related injuries from 1990 through 2014. CBS reported that in addition to Smith’s study, the U.S. Consumer Product Safety Commission (CPSC) found eight child deaths associated with baby walkers from 2004 to 2008. Three of those occurred when children in walkers fell into swimming pools or spa tubs.

Besides falls down stairs, which accounts for the most frequent type of injury, infants also subject themselves to burns when they pull hot coffee off of tabletops or pans off of stovetops, heights they wouldn’t normally be able to reach unless they were in a walker. Other frequent mishaps include tip-overs, resulting in skull fractures or neck injuries.

The problem seems to stem not so much from a lack of supervision of these children by inattentive parents as a lack of appreciation for how quickly the tykes can move when given wheels.

“I have commonly heard the words from parents who brought their child to the emergency department after an injury in a baby walker, ‘Doctor, I was standing right there, but she moved so fast that I did not have time to stop her.’ These are good parents, who were carefully supervising their children and using the baby walker as intended,” Smith told CBS.

Walker-related injuries actually plunged after 1997, when the CPSC instituted new regulations that were supposed to prevent falls down stairs, including making frames wider than regulation stairway doors. But injuries have continued at the rate of slightly more than 2,000 per year.

In addition to the physical danger from walkers, Popular Science reported on a 1997 study which found that babies who used walkers experienced delays in motor-skill development by anywhere from a month to two months, though a 2017 meta-analysis couldn’t confirm the previous study. This defeated the purpose of those parents who bought the devices thinking they would help their children learn to walk sooner.

Given all this evidence, we support the American Academy of Pediatrics’ (AAP) recommendation that the devices should be banned outright. If you have any question about this or anything else related to your child’s health or safety, please let us know.