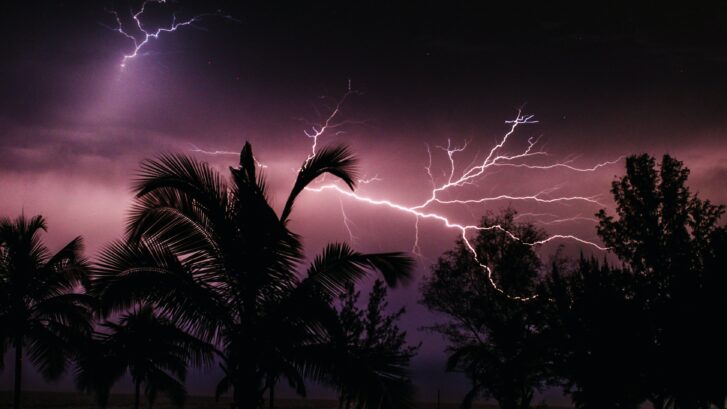 Did you know that Florida tops the national list for lightning deaths every year? That’s why we’re known as the “lightning capital of the U.S.” And the southeastern coast of our state is second only to the Tampa area in reported fatalities. Finally, the deadliest month is July, which typically sees nine deaths per year.

Just this month, two people were struck as they tried to leave Clearwater Beach when a thunderstorm approached. One remains in critical condition, while the other victim remains stable though still hospitalized. And in May, a Port St. Lucie man was killed by lightning while doing yard work.

Our concierge doctors want to alert you to this largely unnecessary cause of death, correct some of the myths surrounding lightning, and show you how to protect yourself and your family.

According to the National Weather Service (NWS), Florida’s unique location—a peninsula surrounded by water—is the ideal breeding ground for thunderstorms accompanied by lightning.

This is due to the clash between the warm land—with temperatures in the upper 80s to low 90s in the summer—and the relatively cooler ocean temperatures. When cool ocean breezes meet the hotter air over land, the collision between the two creates thunderstorms, in turn triggering lightning and air-to-ground strikes.

The NWS reports that a host of myths surround the phenomenon of lightning, which can prove deadly to those who believe them.

Myth: Cars are safe because the rubber tires insulate them from the ground.

Fact: Rubber tires provide no protection from lightning. Cars are safe because of their metal shell and steel frame. Convertibles are not safe.

Myth: Lightning-strike victims are electrified and should not be touched.

Fact: Lightning-strike victims carry no residual electrical charge. It is perfectly safe to touch a lightning victim to give them first aid.

Myth: If it is not raining, then there is no danger from lightning.

Fact: Lightning often strikes outside of the rain area as far away as 10 miles (and can travel even greater distances in exceptional situations).

Fact: “Heat lightning” is a term used to describe lightning from a thunderstorm too far away for the thunder to be heard. The lightning hazard increases as you move toward the storm and eventually the thunder will also be heard.

Fact: While metal does not attract lightning, it can create a path for the current to travel.

Rule #1: Stay away from trees in a thunderstorm. Lightning can strike taller objects near a person, and the current can jump to a person standing nearby. If lightning strikes a tree, the current can travel through the ground to anyone nearby.

The NWS offers these additional guidelines to avoid being struck by lightning.

If someone is struck