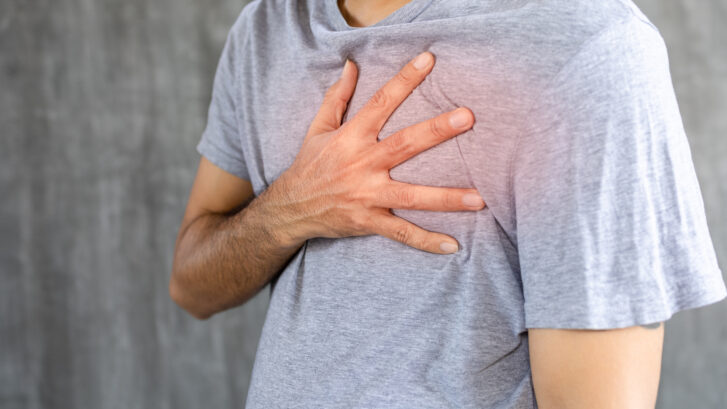 Whoever dubbed the searing pain of acid indigestion “heartburn” got it right. The (usually) benign phenomenon can come on suddenly and have you wishing for an internal fire extinguisher to make it stop. Fast.

An estimated 60 million Americans experience heartburn at least once a month. Because it’s so common, our concierge doctors in Jupiter, Florida, want to explore the causes of heartburn, ways to prevent and treat it, and when you should be concerned about it.

When people talk of having “heartburn,” it’s pretty much just what it sounds like: a burning sensation in the chest, in the region of the heart, just behind the breastbone. It typically flares up after a meal, or when lying down or bending over.

It is caused by stomach acid backing up into the esophagus (the tube that carries food from your mouth to your stomach). Normally, the opening between the esophagus and the stomach is kept closed by a band of muscle (the lower esophageal sphincter, or LES). The contents of the stomach are supposed to stay there, thanks to that sphincter.

When the sphincter relaxes, it allows the contents of the stomach—including highly corrosive hydrochloric acid—back up into the esophagus, which causes the burning sensation known as acid reflux. While the stomach has a lining that protects it against the effects of the digestive acids, the esophagus does not.

The most frequent cause of heartburn is eating more than the stomach can comfortably contain at one time. Those who are overweight or pregnant also experience it more often. Tight pants or belts can likewise constrict the belly, forcing stomach contents back up into the esophagus.

A common trigger is the act of lying down, either while eating, or shortly afterward. Many people experience heartburn only in bed, when gravity helps the stomach contents to flow the wrong way.

Certain foods can also cause the LES to relax enough to let stomach contents rise into the esophagus. Heartburn triggers vary for different people, but the most common culprits can include:

Of course, stress can be a culprit, too, because it can increase the production of stomach acid at the same time that it slows digestion.

In addition to identifying and avoiding your personal heartburn triggers, various home remedies have provided relief for many.

The classic heartburn reliever is a teaspoon of baking soda in eight ounces of water. The baking soda neutralizes stomach acid and works rapidly to relieve discomfort.

Some people swear by apple cider vinegar or lemon juice. This may seem counterintuitive, because they are acidic foods, but sometimes heartburn can be caused by insufficient stomach acid. This slows digestion, which means food sits longer in your stomach, and has more opportunity to back up into the esophagus.

Ginger is a popular remedy for nausea, while others also claim it tames their heartburn. But ginger can also cause heartburn in some people, so use it with caution.

If you experience heartburn mainly at night, try elevating the head of your bed four to six inches with wood blocks or bricks. Using more pillows won’t help, however.

Occasional heartburn is no reason for concern, but if you experience it regularly—two or three times a week for longer than four weeks—it’s time to check with us.

Frequent heartburn is known as gastroesophageal reflux disease (GERD). It may need to be treated with prescription medications or other procedures, because it can seriously damage the esophagus and even lead to esophageal cancer. It can also be a sign of an ulcer.

Finally, the symptoms of a heart attack can mimic those of heartburn, and vary from person to person.

While the most common symptom of a heart attack is chest pain or discomfort, it can also include:

If you experience any of these symptoms, don’t try to self-diagnose. Call 911 immediately.

Other reasons to see us include heartburn symptoms that persist despite all the home remedies or OTC medications you’ve tried, you have persistent nausea or vomiting or difficulty swallowing, or you’ve lost weight. Click here to visit our site for treatment options.