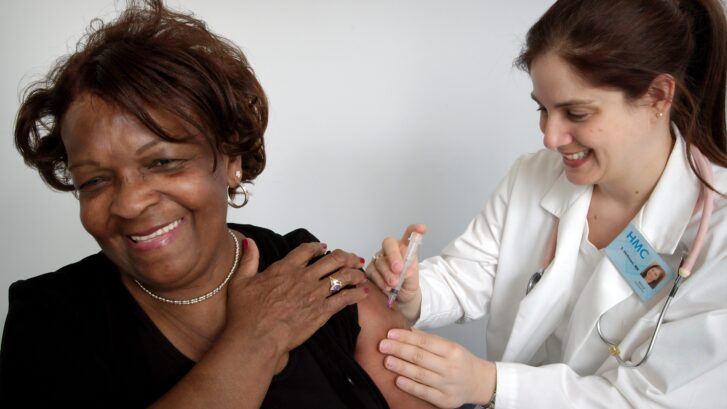 The U.S. Centers for Disease Control and Prevention (CDC) recommends all adults and children older than six months receive a flu shot by the end of this month. The CDC says it takes at least two weeks for the vaccine to become effective. Then it won’t reach its peak effectiveness until another week after that. And children who are being vaccinated for the first time need two vaccines spaced a month apart to become fully protected.

Therefore, our concierge doctors suggest you get your flu shot for the 2020-21 influenza season as soon as possible. While there have been scattered reports of shortages around the country, The Washington Post recently reported a record number of flu vaccine doses—between 194 million and 198 million—have been ordered. Because the vaccine is shipped in stages, more is on the way.

“This year I think everyone is wanting to get their vaccine and maybe wanting it earlier than usual. If you’re not able to get your vaccination now, don’t get frustrated. Just keep trying.”

The CDC’s Dr. Daniel Jernigan, to the Associated Press (AP).

COVID-19 and flu overlap: a ‘twindemic’

We were fortunate the 2019-20 flu season was winding down this spring as the coronavirus crisis began to hit the country. This year, however, we’ll be looking at the possibility of a “twindemic”—both waves hitting at once.

So it’s especially important that as many people as possible get vaccinated for the flu this year. The flu shot won’t prevent COVID-19, but it can help reduce the strain on our already overburdened health care system.

“Since hospitals and doctors’ offices are going to be very busy caring for COVID-19 patients, a flu vaccine can help decrease burdens on the health care system and make sure that those who need medical care are able to get it.”

Dr. Susan Bailey, president of the American Medical Association (AMA) and an immunologist in Fort Worth, Texas, told CNN.

Last year, the CDC estimated that the flu killed 22,000 Americans, and resulted in hospitalization of an additional 400,000. By contrast, at least 215,000 Americans have died of COVID-19 since March.

Health experts are hopeful the precautions we’ve been taking to avert COVID-19—hand washing, social distancing, and wearing masks—will mean this season’s flu won’t take as severe a toll as in previous years. But they all insist that widespread vaccinations are necessary.

Even if the flu vaccine isn’t 100 percent effective in preventing influenza, it has been shown to reduce the length and severity of the illness in those who contract it. In addition, if you’re unlucky enough to contract COVID-19, you won’t want your body’s defenses to be weakened by a prior bout with the flu.

This is already present in the Southern Hemisphere, where each season’s flu strikes over the summer. From South Africa to Australia, public health experts reported remarkably low levels of influenza among their populations. They attributed this partly to coronavirus lockdowns and to extremely high participation in influenza vaccinations.

One pharmacy in Cape Town, South Africa, for example, reported that the demand for flu shots was four times higher than in previous years. People were trying to avoid the co-morbidity (simultaneous presence of two or more diseases) of contracting the flu in addition to COVID-19.

“People were lined up outside the pharmacy down to the corner of the street waiting to get their injections. We had to prevent people from coming into the store.”

Additional benefits of the flu shot

We hope Americans will have the same attitude to this year’s flu shot.

Some people think they’re still protected from the one they received last year. But having received a flu shot last year won’t protect you from this season’s strains of the virus. This is because your immunity from a year ago has deteriorated by now. In addition, manufacturers create a new vaccine each year based on which strains the World Health Organization (WHO) expects to be predominate. This is based on which strains were seen over the summer in the Southern Hemisphere. So this year’s shot will include strains different from those in last year’s inoculation.

It’s important to remember, even if you contract influenza after receiving the shot, it’s likely to be less serious than if you’d skipped being inoculated. And the flu vaccine offers additional benefits, especially among the elderly. For older people and those with chronic health conditions, recent studies show the extra benefits of a flu shot. It’s as effective in preventing a heart attack as quitting smoking, using cholesterol-lowering drugs, or taking blood pressure medications.

So be sure to let us know if you’re interested in getting a flu shot. If you encounter a shortage, we may be able to help you locate a supply nearby.