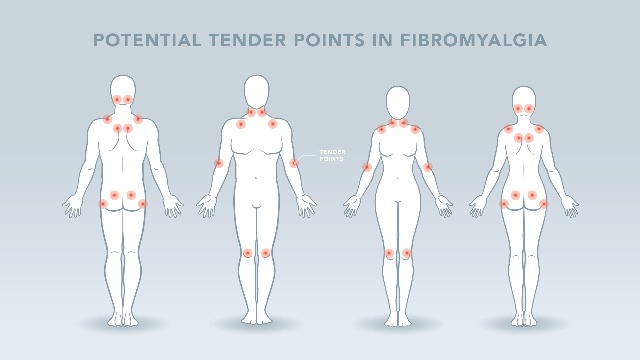 People who experience constant dull body pain, fatigue, insomnia, and difficulty focusing have been told for years that their condition is “all in their head.” Our concierge doctors in Jupiter want to assure those with this debilitating syndrome—known as fibromyalgia—that this is a real condition, and that it can be treated.

Although the exact cause is unknown, recent studies have made progress. One 2017 study, for example, at Harvard Medical School, confirmed that fibromyalgia can be seen on imaging tests as widespread inflammation in the brain.

According to the Centers for Disease Control and Prevention (CDC), in addition to the symptoms mentioned above, fibromyalgia can also cause emotional and mental distress, and those who have it may be more sensitive to pain than people without the condition. It affects about four million adults in the U.S., or about two percent of the adult population.

The most common signs of fibromyalgia are:

Other symptoms may include:

But the overriding symptom is pain: pelvic pain, chest wall pain, muscle pain, and tender points on the back, chest, arms, and legs, along with other pervasive muscle pain throughout the body. Although there is no widespread, definitive laboratory test available for diagnosing the disorder, we will perform a series of tests to rule out other conditions, many of which mimic the symptoms of fibromyalgia.

The CDC lists known risk factors for developing fibromyalgia as:

Other possible risk factors include:

There is no known cure for fibromyalgia, but the good news is, it doesn’t worsen over time, although it is usually a lifetime affliction. Effective treatment of fibromyalgia requires a multifaceted approach using a variety of techniques.

There are three classes of medications approved by the Food and Drug Administration (FDA) to treat fibromyalgia. Pain relievers such as acetaminophen, ibuprofen, and naproxen sodium are available over the counter. We will resist prescribing narcotics, which can not only lead to dependence but may actually worsen the pain over time. Anti-seizure medications can sometimes help. Tricyclic antidepressants may help ease the pain and fatigue of fibromyalgia, while muscle relaxants may help with the attendant sleep issues.

Cognitive behavior therapy (CBT) has often proven useful in reducing symptoms. This is not to suggest that the condition is “all in the mind,” but study after study has shown that the mind can play a role in worsening the symptoms of this or any illness. Occupational therapy and physical therapy can help alleviate pain and show you how to avoid pain-causing movements. Biofeedback can also help you train your body to control some of the pain of fibromyalgia.

Acupuncture, acupressure, and meditation have all demonstrated some success for some people in relieving the conditions associated with fibromyalgia. One study in the Journal of Rehabilitative Medicine found that subjects who received acupuncture saw relief of their pain for at least two years.

Yoga and tai chi, with their slow, gentle movements, combined with deep breathing and relaxation, have been found to benefit many people who suffer from this condition. Low-impact aerobic exercises such as walking and biking are useful in reducing pain and promoting healthful sleep. Water exercises are particularly well-suited to relieving the pain of fibromyalgia. Massage can not only relax you and help you sleep better, but help improve range of motion and relieve some pain.

If you are experiencing the kinds of symptoms described here, please let us know. We can rule out other causes and help develop an effective plan to manage this disorder.